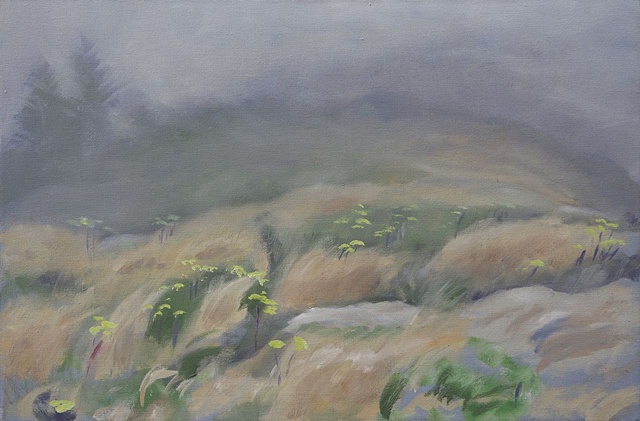 My father, Joseph Lee Lowrey, once told me "I want to paint the mountains around Asheville because they have never really been painted". I was 10 years old at the time and I, as usual, was helping him set up his field easel in the cold November air across from Mount Mitchell. 40 years later I understand the meaning of his desire. Although many fine artists have painted these mountains since this time, few have captured the quiescence and solitude of the Great Craggies, The Blacks and the Blue Ridge Mountains in winter. As a young man Joe studied painting and drafting before attending college at Emory University. Leaving college to join the war effort he applied and was accepted into the Canadian Royal Air Force, later transferring to the Royal Air Force where he flew Spitfires stationed in North Africa and Malta. After the war he became a professional photographer with work published in Leica Magazine. He received his MFA in painting from the University of Florida studying with Hiram Williams and Stuart Purser. A NEA grant brought him to Western North Carolina where he had long wanted to live and paint landscapes. He served as a Professor of Art at Warren Wilson College in the early seventies before retiring. He passed in 1979 and was survived by his wife Winifred and children, Rachel, Perry and Scott. He left behind a small but outstanding body of work, some of which are presented here.